It’s 2005 or 2006 and I’m doing an MA in Fine Art at Chelsea School of Art. I’m in a tutorial and Anders is holding a brick with a large potato balanced on top. He is explaining his work and answering questions about it.

I’m thinking: “What the fuck am I doing here?”

I graduated from Reading University with a BA in Fine Art in 1991 (a 2:1 I am proud to say. I always thought that that was the best kind of degree to have in Fine Art, a first would have meant that I had been conforming too much ). Then I lived in Madrid, started a restaurant with two friends in France, worked as a volunteer in a Bosnian refugees camp in Slavonia (I need to write how I ended up doing that but I am not sure if I can just yet), on my way back I met Katarina (the love of my life) in Veli Losinj and have lived together ever since; first in Bologna where I worked behind the bar in a late night pizzeria / night club, then lived in a caravan in the garden of my great-uncle’s house and worked as a commis in a posh hotel in Montecatini (I have to write about that experience, it’s a funny one, I’ll make a note). Then I bluffed my way into becoming a graphic designer and got a job in a repro house near Macerata where we lived in a very strange village called Colbuccaro (I need to write about that too), then worked as a graphic designer and then had a bit of a nervous breakdown. Stayed one month with Charlie and Pat in Lisbon and then Katarina and I moved to the UK. We lived with my grandmother in Wiltshire, my uncle helped me write an amazing CV and from then I worked in children’s books publishing, first for Egmont and then for Walker books. Sorry about this, I am trying to recap my time between finishing my BA and starting my MA (14 years) as quickly as possible so not bothering about proper punctuation. In 2005 I got pericarditis (it’s an inflammation around the heart or something), quite serious but not too serious but at the beginning it was thought that I had had a heart attack. I’m getting there but 14 years is quite a long time: by then I had been working 9-5 for 7 years and pretty much depressed most of the time as working 9-5 is not for me. I decided to go freelance and to do an MA in Fine Art (and also we decided to have children).

The day before, I had had my first tutorial, I present my paintings and they pretty much tell me that it’s all shit. I’m looking at Anders talking about the potato on the brick and looking at the other students and tutors and they all seem to get it.

I’m thinking of leaving. I have a chat with Brian Chalkley and Dawn Mellor and they seem to agree I should think about beliefs. Beliefs?

I am torn between a part of myself who believes that it’s all bullshit and the other part of me who doesn’t understand but really wants to. I make a video of a conversation between my two selves.

Also, in a book about conceptual art I see a photo of a guy just about to cycle into a canal.

Ader used the act of falling […] to investigate the transitional relationship between the acting-out of the fall; the real-life moment in which the artist actually falls, relinquishing dramatic control; and the representation of the event through documentation.”

I see Brian in the canteen and ask him if I can talk to him about an idea I have: “I would like to re-enact Bas Jan Ader’s fall”. I was expecting and hoping Brian would say “I can’t let one of my students do something like this.”, instead he said “Great, do it!”.

I wrote to the Stedelijk museum in Amsterdam and a curator got back to me and we had a chat about my project. I told me that the place where Bas fell wasn’t possible anymore as some little barriers are now there (to stop drunken cyclists falling in I suppose) but advised me on similar suitable locations and said that he would like to meet me in Amsterdam (can you imagine a curator from the Tate giving up his or her time to a not famous artist?).

I book flights and a hotel near the chosen location. Katarina would come with me and Ludi’s brother who lived in Amsterdam agreed to help me find a second-hand bicycle.

Before doing the real thing in Amsterdam, I decided to do a test run in the Serpentine. Janko lent me his bike and his mother came too. I cycled into the Serpentine twice 9the first time there was a problem with the camera) and there were three elderly people setting on a bench just by were I “fell” into the water and they hardly reacted.

I am going to speed up now as I am boring myself.

We check into the hotel and then meet Ludi’s brother, Clive. He’s really cool and doesn’t seem to find my project in anyway unusual. He has a friend who is happy to give me an old bike but there are no breaks and needs a new wheel. I won’t be needing breaks but we go together to a bike shop and get a new wheel. The next morning we get to the location, I have two cameras on tripods, one for Katarina and one for Clive.

Katarina bought a rope to help me come out of the canal and two bottles of Evian to wash me as the water looked really disgusting and she had been reading about diseases you can catch from Amsterdam canals.

I can have only one go. I am ready in my position and wait for Katarina and Clive to give me the thumbs up. I start gathering speed, as I get closer I see how disgusting the orange water was and I start having second thoughts but these are pointless as I have no breaks: “what the fuck!” and I relinquishing dramatic control.

After the splash, I swim to the other side and with the help of the rope Katarina has thrown I manage to easily climb out. After a quick wash with Evian, I walk to the hotel and walk past the lobby and up the stairs dripping with water. I 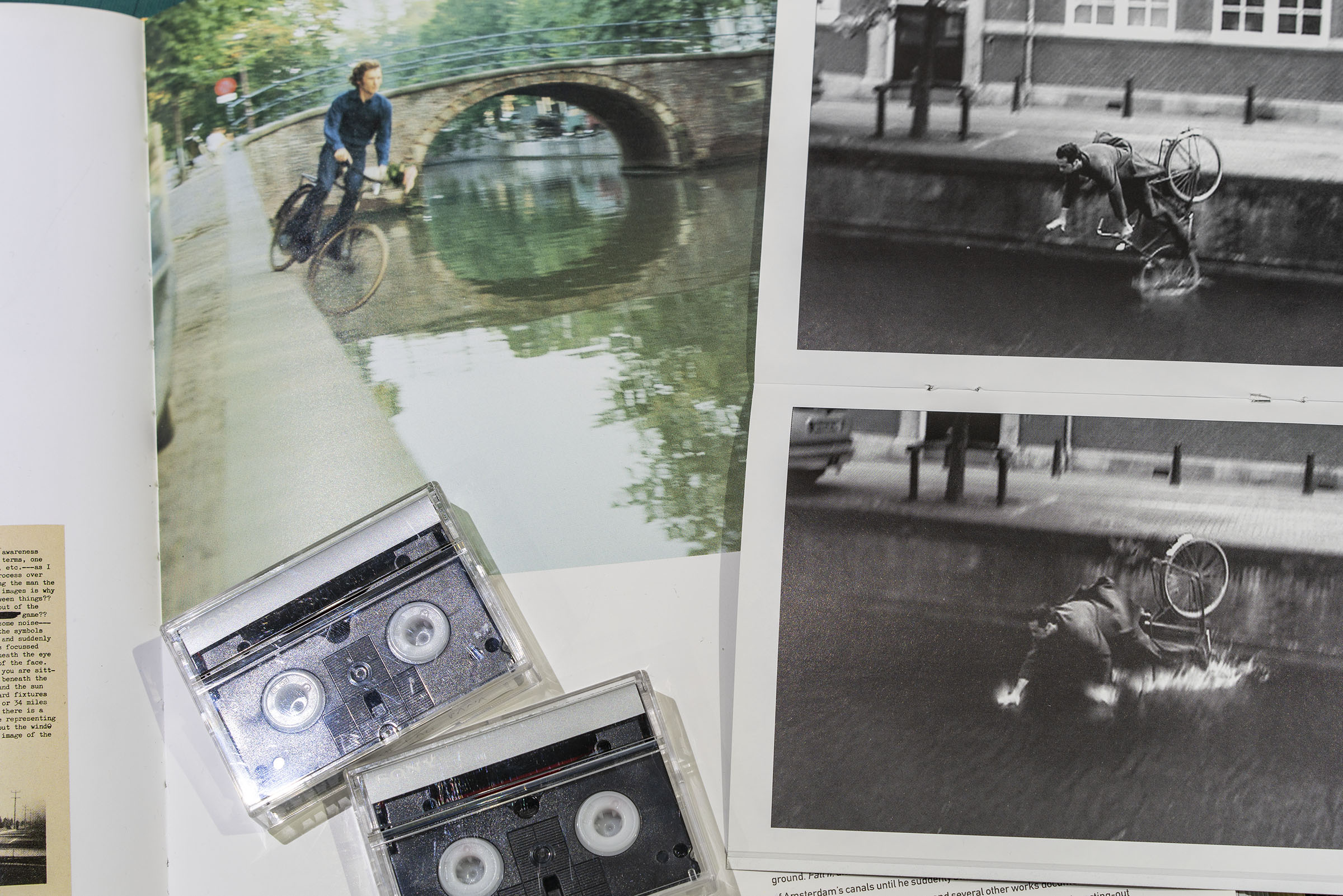